Factor 11 incorporates the diverse musical talents of its members, resulting in guitar driven harmony rock. It’s original music is thematic and challenging, covering issues from terrorism to true love. The band does not take itself too seriously though, as is evident by its soon to be famous song: Good Looking People Drink Wine. Bad Looking People Drink Beer.

In live performances, Factor 11 covers some of the best eclectic classic rock songs ever recorded and blends in own original music. The band puts on a great show and has a fresh sound that appeals to a wide variety of people. Factor 11 has played in venues throughout California, including:

… just to name a few! The Band has toured as far away as New York. The band focuses on playing at county fairs, festivals and small clubs. Factor 11 always gets people up and singing and dancing.

Factor 11 band members generally do not like the same music. The bass guy is a rocker. Lead guitar blends rock and newgrass. Rhythm is a choir director. Drummer is power rock. With a diverse group like this, it is surprising that the band stays together. The essential ingredient is that band members like each other, respect each other’s’ musical differences and blend them into the band’s performances and recordings. Check out the Live Performance set list at www.factor11.org/ and you’ll see what I mean.

Factor 11 band members reach out to the community and team up with local interdenominational church groups to connect with incarcerated youth at the Marin County California juvenile hall facility. Music can be a “bridge” to providing hope for a better life and freedom from the repeat cycles of crime and drug addiction. We meet chronic felons, as well as kids who just stayed out too late, in Juvenile Hall. The stories are very interesting. What is most satisfying is meeting some of these kids, impromptu on the street, or in a supermarket, when they come up to you and ask if you remember them and then tell you how their lives have changed for the better.

Factor 11 consists of Spencer Scheer, songwriter, vocals and rhythm and lead guitar. John Coons, vocals, rhythm guitar and sweet harmonies; Jerry Thompson, drummer. Tony Leng, bass guitar. Note: Some of our kids used to play in the band, but they got smart, grew up, went to college or to work and for the most part moved away. They still come back on occasion to see the band.

Factor –11 released a CD called It’s in the Blood in 2004. Containing the single Mystery called Love, in 2004. The single received radio play throughout the U.S. and reached #29 on the New Music Weekly AC Chart in June 04. There is nothing cooler than hearing your music on the radio!

Factor 11’s Latest release is called Time Machine. The recording was released on December 25, 2016. With Time Machine, Factor 11 brings its guitar driven harmony rock sound with a dagger aimed at the PC Culture. With songs addressing workplace oppression, political correctness and the known fact that good looking people drink wine and bad looking people drink beer, there are no sacred cows here! The Bank will release a new recording called 23 and Me in 2020. 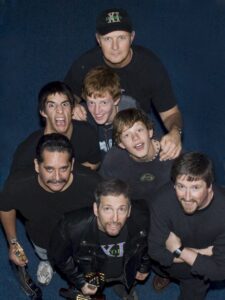